Rituals and significance of Ganesh Chaturthi 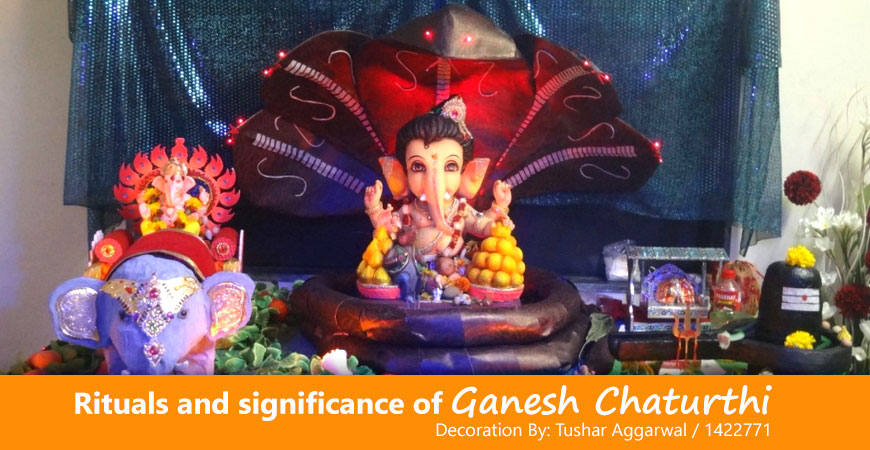 My favorite festival since childhood was always Ganesh Chaturthi. I loved the vibrancy it created in city of Mumbai. I realized that I didn’t know the rituals behind the puja and hence decided to speak to elders and Pandits to know their significance and order in which they are performed. I have tried to list the rituals below in a very simple manner for all our readers.

Ganesh Chaturthi is celebrated as the birth anniversary of Lord Ganesha, a god who is believed to eliminate all obstacles. It is said that Ganesha was born on the fourth day of Magh hence it’s called Ganesh Chaturthi. Falling in the months of August and September, this is one of the festivals which Mumbaites celebrate with great passion and enthusiasm. The festival is celebrated by bringing home small idols of Ganesh and worshiping them for 1.5, 5, 7 or 10 days depending on your wish.

Ganesh Chaturthi was first celebrated by Chhatrapati Shivaji Maharaja, and since then it is being continued. When slowly and steadily the custom started to fade out, freedom fighter Lokmanya Tilak brought back the tradition in the form of a 10-day festival. The preparation for this festival starts months in advance. The idols of different sizes and styles are made.

On the first day of the festival, the puja starts with the idol being kept over a pedestal that symbolizes a throne. This is followed by a priest performing a Puja to fill the idol with life. This is called ‘Avahana’. The ritual is accompanied by chanting of sacred mantras and bhajans.

Once the ‘Aavahana’ is complete, you can perform aarti and light diyas around the idol. During the prayers, 21 blades of Dhruva grass, 21 modakas, 21 red flowers, and a red tilak using sandalwood are offered. The number 21 represents five organs of perception, five organs of action, five pranas, five elements, and the mind. A coconut and a small bowl of grains are kept alongside the idol. For the next 10 days, aartis are done twice a day on this Ganesh idol.

Gauri Puja starts from the third day after Ganesh Chaturthi which is known as the day of Gauri Awahan (Arrival). Total stay of Gauri is for three days, the first day is a day of welcome, second is the day of pooja and worship, and she is also offered Nevedya and the third day is of immersion in the water. Women also perform the community puja along with Haldi Kum Kum ceremony. Not all people get goddess Gauri home.

At some places people prefer the photograph of Goddess Gauri rather than the idols. They place a Kalash (copper pot) with a coconut on top considering it as the Goddess Gauri.

On the 11th day, the idols are immersed in a river or sea. Singers, dancers, and large number of people accompany the farewell procession of Lord Ganesh idol. The immersion of Ganesh idol symbolizes the journey of Lord Ganesh to Kailash, taking away all the misfortunes of the devotees with him.